There are now many locations globally that serve as must visit places for the GT angler and more are emerging of course as opportunities and minds expand and expeditions are mounted to explore new area's.  Historically however Komodo in Indonesia was one of a handful of spots considered world class.  In the embryonic days of GT popping; Komodo was the testing ground for equipment and will forever be enshrined in popping history.  Stories of cricket score catches of GT are legendary but on examination of the habitat this certainly seems possible.
My good friend Adhek should need no introduction however he is such an understated individual I must.  The man simply does not blow his own trumpet or seek publicity such is his nature.
Adhek has run popping and jigging charters in Indonesia for more than 20 years after first being introduced to the concepts by Mogi San.  For about that long, Adhek has been designing and building top water lures as well.

Adhek deserves respect and I am very honored to call him a friend, his contribution to top water fishing should be more widely acknowledged.  It is interesting to note that around 80% of Adheks clients come from Japan still to this day.  Adhek gave away fishing in Komodo more that a decade ago as the area had been commercially and recreationally fished to the brink with bad catch and keep practices so rife throughout Indonesia.  Past destructive fishing practices such as dynamite, cyanide, and compressor fishing severely threatened the Park's marine resources by destroying both the habitat (coral reefs) and the resource itself (fish and invertebrate stocks).  The declaration of the Komodo National Park and more importantly the declaration of the area as World Heritage Site and a Man and Biosphere Reserve by UNESCO has aided significant recovery with much better management in place.

Over the last two years Adhek has been revisiting Komodo often with spectacular results.  It has gotten to the point that both of Adheks boats, GT1 and Hapuka operate from Komodo and Bali is being somewhat neglected now to the detriment of fans of fishing that region.  It is noteworthy that Adhek is licensed to fish the Komodo National Park and a Ranger is on board as an observer each day to ensure ethical fishing practice compliance.

It has taken me a while to line up the right time to visit Komodo however that chance recently presented and I traveled to Labuan Bajo with a typically international GT crew - Stuart and Lee Newnham from the UK (I have fished with Stewart before in Oman) and Chaun Tay from Singapore.  Some serious GT pedigree among this group.

Disappointingly my rods and luggage did not show up with me despite Garudas best efforts so I would initially be stuck using Adheks custom Carpenter's, I could handle that but thankfully my gear showed up after a day.  Despite this hiccup I actually strongly support Garuda as the best airline to use within Indonesia when traveling with large amounts of luggage, just not so much this occasion.

I am trying to find the words to describe Komodo and it's difficult to exactly corner to be honest, the place is like no other I have fished.  A vast expanse of islands, islets, reefs, bommies, shoals and rock formations swept by intimidating currents and surrounded by green hills and spectacular ranges are a mouthful.  Inshore I get a feeling I am fishing in a large inland lake or wide mountain river in North America or Europe.  Outside or ocean side it is significantly different again and the feeling is that of wild ocean.  Massive bommies with big seas crashing over the rocks and competing with current for the greatest disturbance is a recipe for white water and perfect GT habitat.  Anywhere you look, inside or outside there are ample locations in fact hundreds if not thousands of them that you would regard as A grade GT spots; currents raging over reef and drop offs with ample bait fish trying for their life to avoid being swept into the zone of destruction, it gets your casting arm twitchy at the thought.
The fishing was good without being spectacular but tapered off as the days went at odds with the good current.  Our highlight was an incredible two hours of mayhem on our second day where we were either hooked up, missing chances or watching GT's smash bait to oblivion.  This session was capped off with Stu nailing (or being nailed by?) a very fit and large GT in raging current.  The 15 or so minute fight was intense and left Stu victorious but gasping for air.  Stuart at 59 years old and Chuan at 58 are my ample inspiration to keep chasing GT's for a long time to come.
One of the bommies offshore that sadly was slow for us had produced 52 fish in a session for Adhek in January such is the on or off nature of GT fishing but demonstrates the potential.  To dismiss GT's as dumb or easy is pure ignorance and indicative of limited experience, they can be as fussy as any fish on their day.

Located in the centre of the Indonesian archipelago between Sumbawa and Flores, Komodo as a visitors location is easy at a simple 90 minute flight from Bali and the main settlement of Labuan Bajo provides ample hotel accommodation and eateries and is safe and well serviced.
Whilst Komodo only lit up for us for a short but memorable time, there was ample evidence and incentive to be back soon only this time is will be inclusive of dogtooth jigging tackle.

Please enjoy some images and contact us for any inquiries.

The best Reef Raiders yet?

Returning to a favorite distant location is always an exciting time, when its to Southern Oman to fish for giant GT's with your mates i... 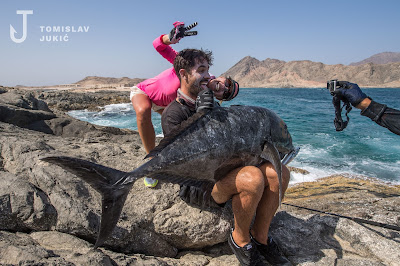